Results of the Challenge can be found here and here.

The fourth Wood Stove Design Challenge will be on the National Mall in Washington, DC from Friday, November 9 through Tuesday, November 13, 2018. Twelve teams will be competing.

The 2018 event will be free and open to the public and includes rigorous testing of the next generation of technology that can make wood stoves consistently cleaner, more efficient, easier to use and, like solar energy, a renewable source of electricity.

The fourth Wood Stove Design Challenge is modeled after the Department of Energys (DOEs) Solar Decathlon, a competition between teams from universities worldwide to design more efficient and cheaper residential solar power. Like the Solar Decathlon, the Wood Stove Challenge also attracts teams from around the world and focuses energy and resources on innovation and improved performance. The competition is funded primarily by the DOE's Bioenergy Technology Office (BETO), the New York State Energy Research and Development Authority (NYSERDA) and the Osprey Foundation. The event is a collaboration between industry partners, government agencies and other institutions, reflecting the diversity of stakeholders in this energy sector. Among the many in-kind supporters who provided volunteer labor, expertise and equipment, we especially want to the Olympia Chimney for donating all the chimney pipe and accessories.

Participants will compete in two events:  One is to automate the wood stove with 21st century technology like sensors and WIFI-enabled controls that improve combustion efficiency, reduce air pollution and improve ease of use.   The second competition will focus on thermoelectric wood stoves that generate electricity to power lights, cell phones, and WIFI-enabled controls. Thermoelectric generators are similar to solar PV systems except they turn heat instead of light into electricity.  When integrated with a residential solar PV system, a thermoelectric wood stove and battery power system, like the TESLA Powerwall, could effectively double the wintertime output of solar PV system in areas like northern United States, Canada and northern Europe.

Wood stoves are still used by 30  60% of homes in hundreds of rural and suburban counties around the country.  Yet, the technology revolution that has swept household appliances in the last 20 years has by-passed wood stove technology. 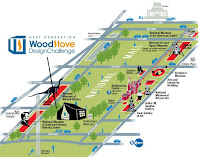 Teams in the 2018 stove challenge will be competing for very modest cash prizes.  The teams and exhibitors will also have a chance to showcase new technology on the National Mall just blocks away from the Department of Energy, the US Department of Agriculture and the Environmental Protection Agency.

"This is a chance for students, back yard inventors, and wood stove manufacturers to re-invent this age-old technology for today’s environmentally conscious and time-conscious consumer," said John Ackerly, founder of the Wood Stove Competition and President of the Alliance for Green Heat.  "An affordable, smart wood stove is achievable and could help millions of families reduce their reliance on gas and oil while significantly reducing  pollution," Ackerly added.

"This is the first Wood Stove Challenge to promote wood stove and boilers that generate electricity to power everything from a cell phone to part of a small home or electric vehicle. Thermoelectric wood stoves, when integrated with solar PV systems and home batteries like the TESLA Powerwall, have the potential to make solar energy more affordable, and pave the way for a more sustainable energy future, "according to Ken Adler, Senior Technology Advisor at the Alliance for Green Heat and formerly with the U.S. EPA.

Previous Stove Design Challenges brought innovative stoves and a diverse array of stove and energy experts together on the National Mall in 2013, Brookhaven National Lab in 2014 and 2016.

Further details about participating and competing in this competition will be available late March, 2017. For more information about the  2018 competition, contact John Ackerly at Jackerly@forgreenheat.org. For inquiries specific to the electricity production category, contact Ken Adler at kadler@forgreenheat.org.